A trip to Bangkok promises a myriad of experiences – whether you just want to do retail therapy, indulge in spa and massages, see the cultural aspects of Bangkok, or a little bit of everything.

In our very short trip, we didn’t too much shopping because that would need a completely different itinerary on its own (but you probably already know where to go – Chatuchak Market, Siam Paragon, MBK Center, etc).  We did mostly the cultural and treated ourselves with awesome Thai food. 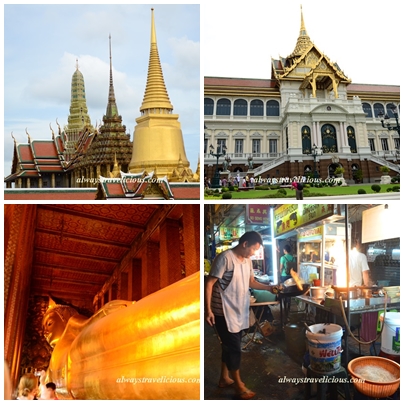 Arrival in Bangkok.  Check into Doubletree by Hilton. We did some hotel-hopping and for our 3 rd night, we stayed at Four Points by Sheraton, both being conveniently located along Sukhumvit.

Visit the glittering and magnificent Wat Phra Kaew that’s adjoined to the Grand Palace. Wat Phra Kaew is THE iconic temple to visit that enshrines the Emerald Buddha which is one of the most important historical relic that dates back to as early as 5 BC.

Visit Wat Pho, or the Reclining Buddha that’s 43 m in length with giant feet decorated with 108 auspicious images made of mother of pearl. Notice the clinking sound of coins – that’s the way to make a wish at the temple by throwing coins into the 108 bowls that encircle the temple.

If you have time (which we didn’t), visit Wat Arun (Temple of Dawn) that’s also in the vicinity.

For dinner, indulge in street food in Chinatown.  Check out T&K Seafood and 15 Things to Eat in Bangkok Chinatown that pervey food from unaltered classic Thai flavors to premium items like fish maw and bird’s nest, all found by the road side.

Take a half day trip out of Bangkok and visit the Maeklong Railway Market where vendors pack up their stores in a whiz to allow the train to pass, and set up the store again once the train is gone – they do this a few times a day.  The Damnoen Saduak  Floating Market is nearby, so you can visit the two markets enroute.  Many tour companies offer this package at around 1200 – 1500 Baht per person; alternatively, you can go on your own via mini vans that depart at Victory Monument Sky Train Station at a much cheaper price of around 80 Baht per person per trip.

As you return to Bangkok, visit the Erawan Shrine; your wishes may come true here.  Remember to “repay the offering” when they do come true.

Pamper yourself with fine dining at Ruen Urai Thai restaurant in a traditional teak house.   If you are too full after dinner, take a stroll at Patpong Night Market that’s just nearby to digest some of that food. 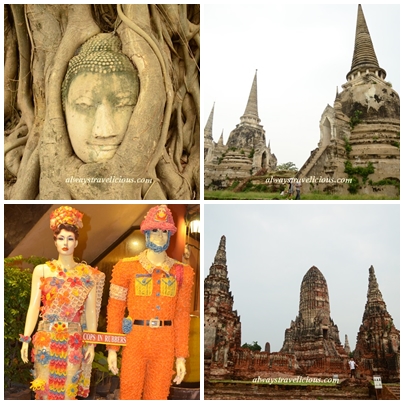 Take a day trip to Ayutthaya, and soak up the ancient aura of the once burgeoning city of Ayutthaya.  The city is in ruins yet spectacular, being ransacked by the Burmese army more than 200 years ago.

Popular temples in the area include Wat Mahathat with the famous Buddha’s head statue wrapped in roots, Wat Phra Sri Sanphet with three giant chedis, Wat Yat Chai Mongkol which is still a functional monastery and Wat Chaiwatthanaram which has a lesser extent of destruction.

You can get to Ayutthaya by taking mini vans that depart from Victory Monument Sky Train Station.  The van leaves once it gets filled up (around 90 Baht per person).  Once you reach there, you can hire a tuk tuk for the day.

Dinner at one of the most weirdly themed Thai restaurant Cabbages and Condoms,where mannequins are dressed in creative condom costumes.   The restaurant serves not only delicious Thai food but also raise awareness in family planning.

Day 4
Depart Bangkok.  If you have a bit of time before your flight, do some shopping 🙂