First of all, the cab driver dropped us off near a park and told us the cave is inside.  We walked in, puzzled yet dazzled by the walkway with flourishing trees. 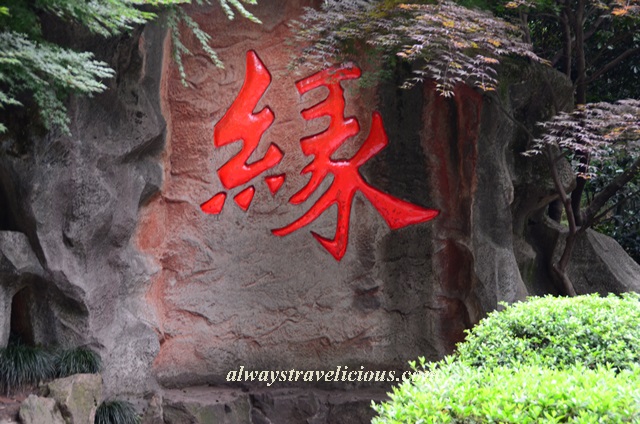 The park has an amusing theme of “fate”, and the big stone has the Chinese character 缘 (fate) engraved on it in red.  The “fate” here is a bit different from the western notion, the fate here is related to people – it’s the fate of meeting someone, the fate of being with someone and the fate of unable to be with someone.  This fate pretty much applies to anyone you meet – your friends, colleagues, teachers and even family.

As we explored the park more, the Yellow Dragon Cave is indeed hidden in the park with a separate entrance. 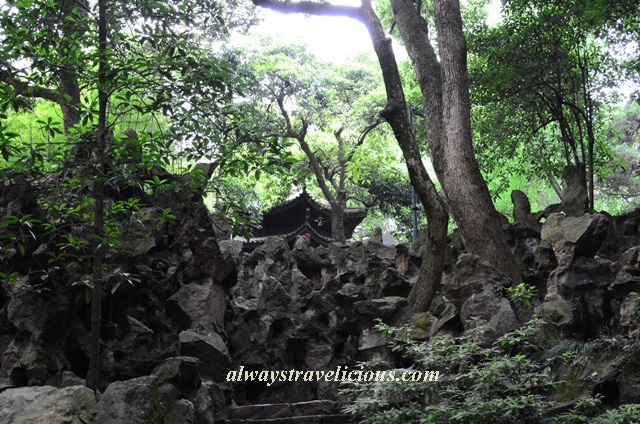 As we entered, we still didn’t see any caves, but it’s more of park within a park.  An enchanting park with exuberant bamboos and stony walkways. 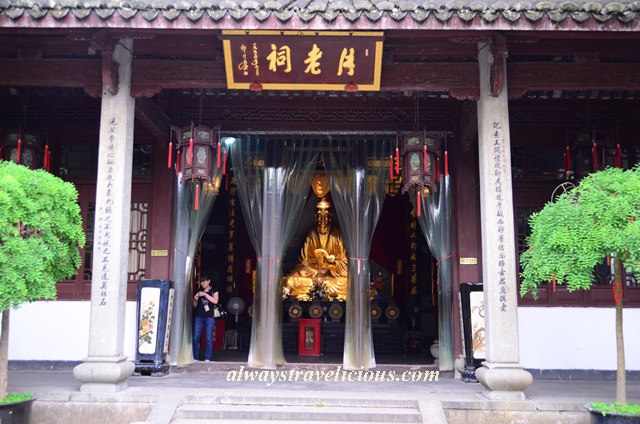 The park too has “fate” as a theme.  The kind of “fate” the park depicts is mostly the lovers’ fate, starting with the matchmaking god’s temple (月老祠).  The matchmaker god, also commonly known as the old man under the moon,  supposedly ties an invisible red thread between two lovers, joining their fate in unison.  So if you are single, there’s no harm sharing your wish to find someone with the matchmaking god 🙂

A symbolic part of the park is the Wish Realizing Terrace (圆缘台) which is the biggest heart-uniting lock in China, with numerous small locks clustered around it. 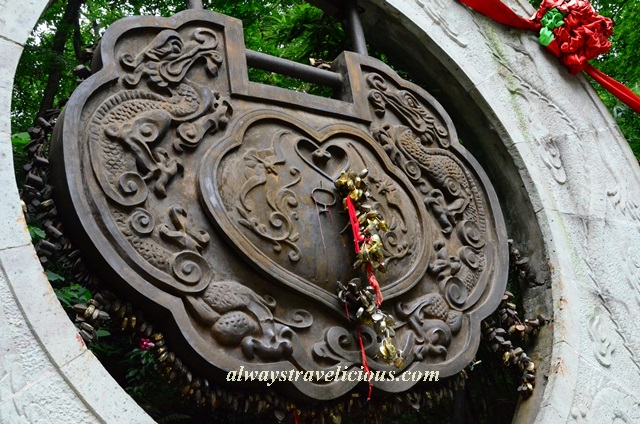 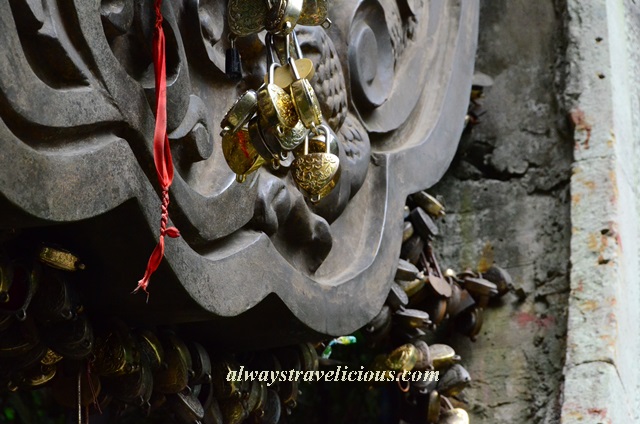 The small locks are available for purchase as you can see they are all identical. During the day of my visit, the counter wasn’t open which was kind of good as there weren’t much tourists, diminishing that commercial atmosphere.

I like the child-wishing dragon angels here – it’s a continuation of fate, when you start a family, you go on to have a child or two.  Apparently, by touching the buttocks, it is believed to help with getting babies!  Maybe that’s why there’s a yellow patch on the buttocks because everyone keeps touching it?! 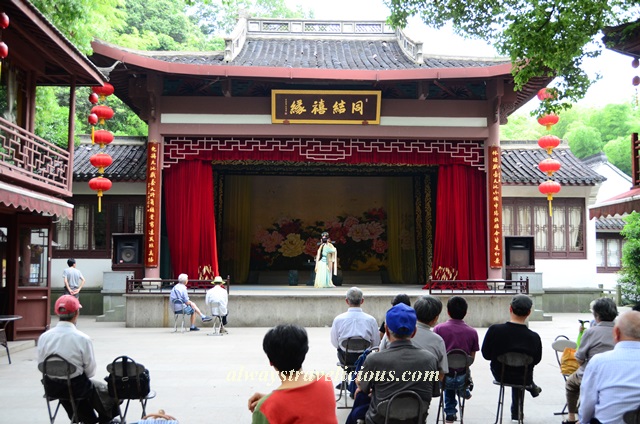 The delightful open air stage is aptly named “Happy Fate Stage” and  you can entertain yourself with Chinese Opera for a moment or two.

The Fate Pond is where you can have some fun with the 6 golden children, each representing a different kind of fate – fate of love, fate of marriage, fate of children, fate of wealth and so on.  Using token coins, throwing them into the coin the 6 children are carrying, and seeing which golden child (or fate) the coin token ends up in illustrates your upcoming fate – not totally plausible but purely for fun. 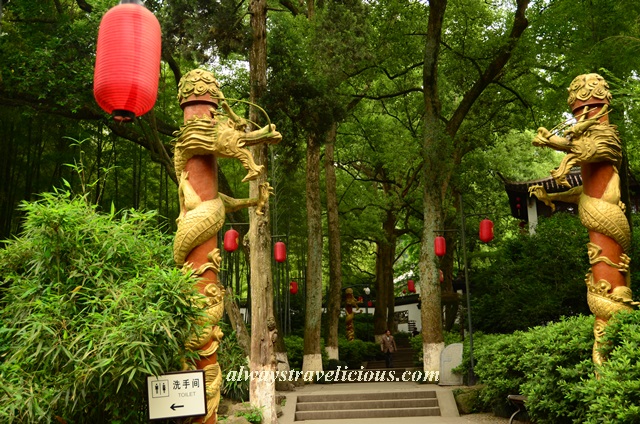 So where are all the dragons and caves? There are some yellow dragons around,  but only to fit in with the dragon myth where a yellow dragon flew in with a monk who came to the area to build his temple.  The rocks split open, with spring water streaming out from the cracks resembling the dragon’s mouth, hence the place is named Yellow Dragon Cave, or more poetically, Yellow Dragon Dressed in Green (黄龙吐翠), which is also rated as one of the Ten New Scenes of West Lake. 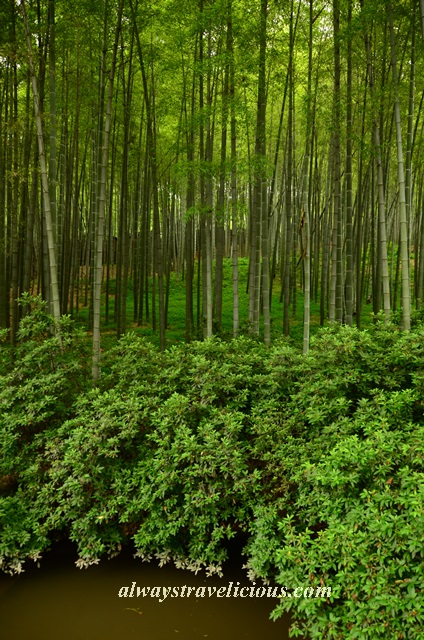 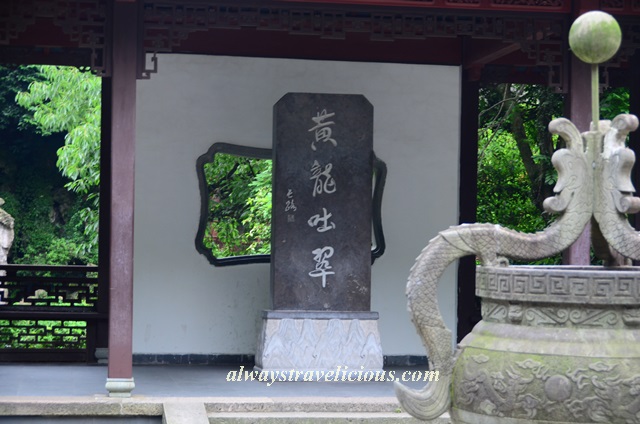 The Yellow Dragon Cave / Park is a lovely place to stroll around especially with the bamboo garden.  It may not be as popular as the other scenic spots in Hangzhou,  but if you have extra time in Hangzhou, it’s a nice place to unwind and break away from the crowds.