The Tsurugaoka Hachimangu Shrine (鶴岡八幡宮) was originally founded by the Minamoto family more than one thousand years ago.  The shrine houses Emperor Ojin  the Warrior God (or  “Hachiman”), his mother Empress Jingu and his wife Hime Gami.

The Warrior God is was originally only worshiped by the Minamoto family because he was the clan’s ancestor and was considered the clan’s Guardian God.  Eventually, as the Minamoto family established the first shogunate military government in Kamakura, the worship of the Warrior God also became widespread among commoners and the faith of Hachiman is maintained till today. 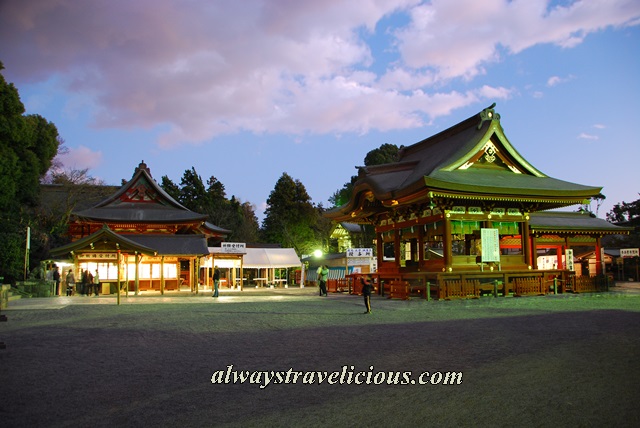 We were at Tsurugaoka Hachimangu during the winter so the sun set really early, around 5pm.  We lingered a bit at the lower prayer hall, happily setting up our tripod, taking photos.  Then within minutes the sky darkened so quickly. From a somewhat pale blue-ish sky it became so dim.

Then before we even realized, there was only us left in the dark……

As much as I would have liked to go see what’s there inside the shrine, we had to call it a day, taking a walk back along the lantern-lit path.