Hotel Du Nord is a charismatic hotel and it is so full of travelling vibe that the owner must be an avid traveler himself.  I love the decorations used at the hotel.  They are not grand or anything, but it’s the little things that gave the hotel personality.  Upon entering the hotel, we were greeted with a splash of red – the red wall and the red little porter.

The lobby has big and small old-fashioned luggage here and there.

The lobby itself has a few cozy corners to sit around. 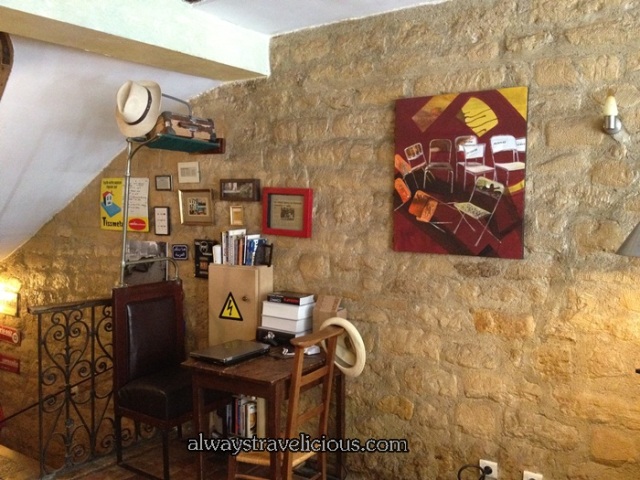 The stone wall concept is used in the lobby and the basement dinning area.  It reminds me very much of Hotel De La Muette, a few-hundred-year-old-mansion-turned-to-hotel in Arles.  Makes me feel like I’m staying in a castle – even more so when you see the dinning area photos. 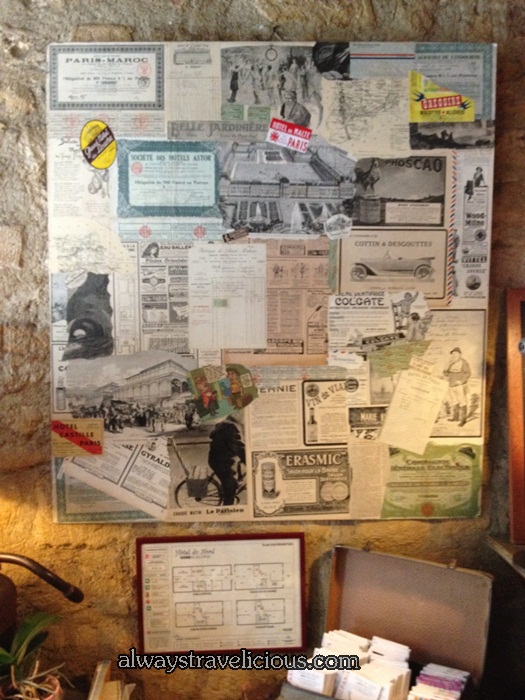 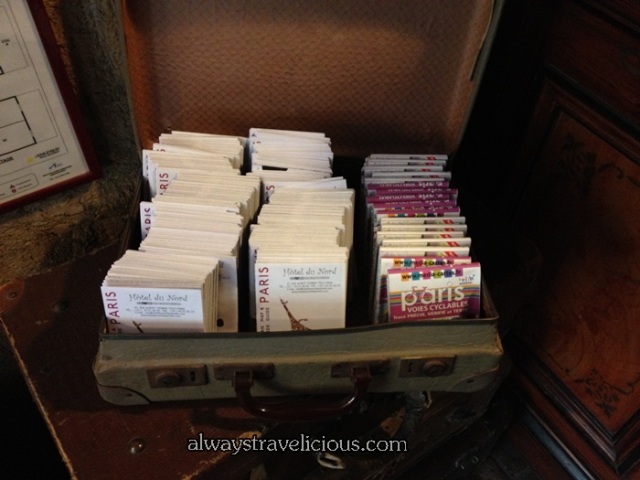 I love the yellow post box right next to the stairs (I am not sure if it’s functional). 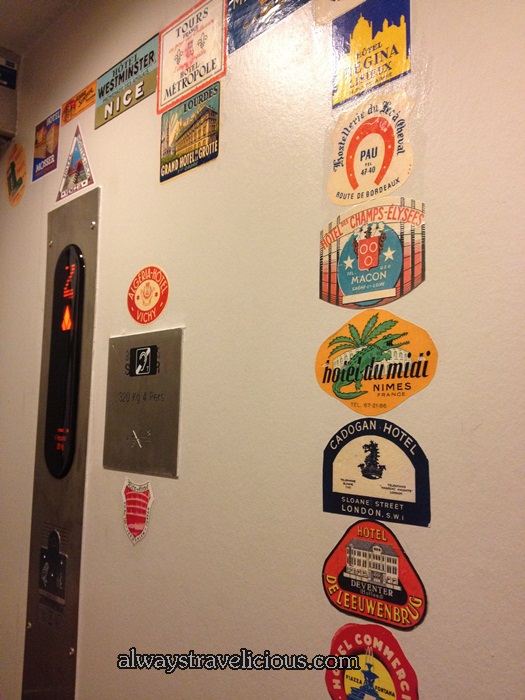 As we went into the elevator, it’s not the most beautiful elevator, but definitely one of the coolest.  It is full of hotel stickers from all over the world.  The design of the stickers looks aged; I don’t think you even get these hotel stickers anymore.

Our room was on the 4th floor and each floor had 4 rooms. 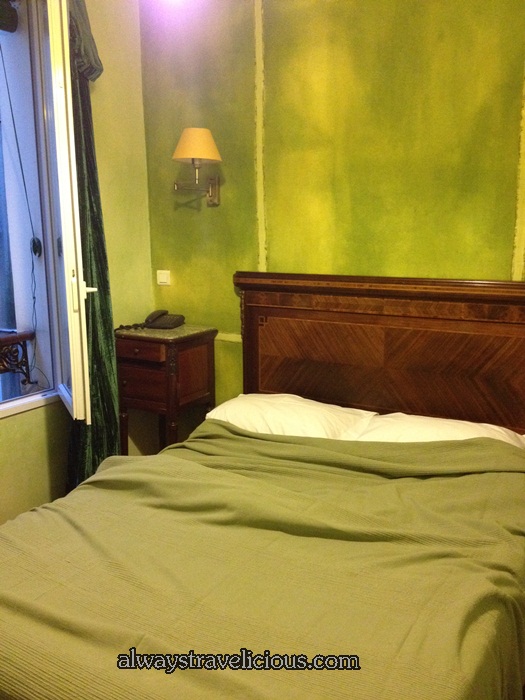 Our room was a lime-green room.  I am not a big fan of the green but after a while, I got used to it and I thought the dark wood furnishings with the green made it vintage.

A corner with table, chairs, books and TV (a little too high on the wall). 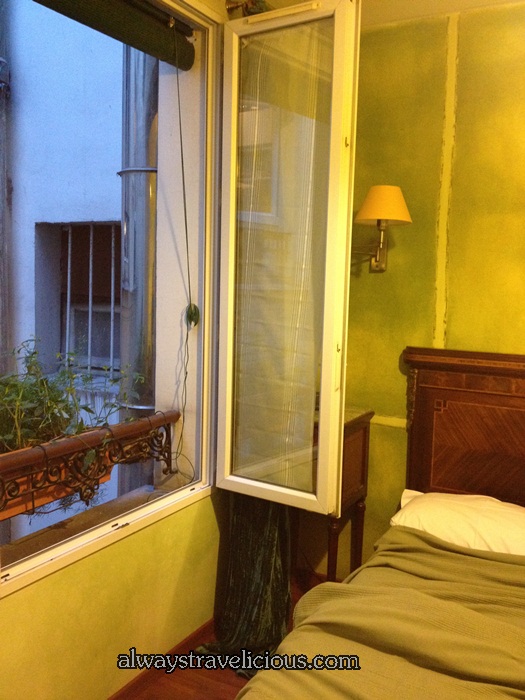 A big window in the room – opening it is a must as there is no AC.

The bathroom is small but it is clean and the utility tray is a plus-point.

As we arrived after dark, I never looked at the building itself until the next day and Hotel Du Nord is indeed one lovely hotel with flowers planted at every window.  Oh and if you are interested, you can borrow the bikes for free.

Breakfast is at the basement dining area (7.50 euros per person).  I can almost use “adventurous” to describe breakfast.  We went down a spiraling staircase under a dim light, passing by a pilot uniform, street signs, street lamps and we weren’t able to see the dining area until we were onto the final step.  Kind of like going up the staircase at Sainte Chapelle and discovering kaleidoscopic colors, but only the effect is not as dramatic.  You get the idea. 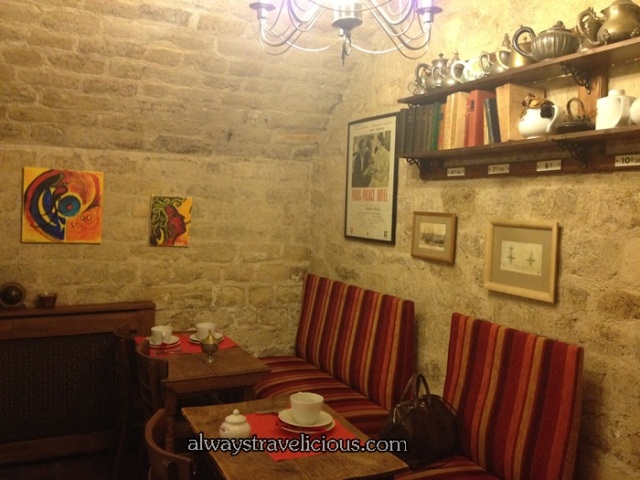 At the end of the staircase, we arrived at an enchanting, artsy dining area with stone walls, chandeliers and the highlights of red seats.

Doesn’t it seem like you are enjoying a meal in a castle?

Breakfast is simple – coffee + orange juice + croissants + bread with butter and various kinds of jam.   Both the croissant and bread had excellent texture.

Hotel Du Nord is a charming hotel but it’s s not perfect and has a few minor things that may not appeal to everyone. Our room was above the alley and we could smell spaghetti and coffee (I think  perhaps just a few room get the aroma…  the rooms facing the main street should have no problem), there was no AC, the green wasn’t my favorite but I got used to it and it actually jive with the overall concept of the hotel – a different color in each room ( I peeped at one other room while house keeping was cleaning so I know.  The other room I peeped at had a brilliant yellow that was really nice actually!)

Safety wise, on the first night we arrived, we arrived after dark and walked past a few bars where the crowd seemed a bit rowdy.  We were a bit uncomfortable.  But if we had arrived at day time, we probably wouldn’t have any concerns and after familiarizing with the area, we were not concerned anymore.  I think it was just that our first impression of unsafe was a bit obscured by the fact there were a few bars within the vicinity.

Overall, Hotel du Nord is one cool hotel with personality to stay in.  Despite a few minor things that could have been better, it was within an acceptable range to me.  After all, the room rate was only 75 euros per night.  In an expensive city like Paris,
I am not complaining.